In which bookshelves are installed at the New York Public Library

When the New York City Public Library opened on May 23, 1911, the building spanned over two city blocks and boasted one of the most impressive collections of books—and bookshelves—in the world. “ It is impossible to think of New York without the New York Public Library, ” notes Henry Hope Reed, during the centennial celebrations of the library. “[Its] presence is that of some great natural fact. It would appear to have always been there.”

During its initial construction, the newspaper media talked up the library’s bookshelves something fierce. Since the library was to hold over three million volumes, shelving and storing a collection of that size was no small undertaking. In 1905, initial schematics of the library ’ s bookshelves were published in the New York Times and Scientific American; articles claimed that the library had a set of bookshelves constructed on a practically unheard-of scale, unlike any other shelves in any other library built before it. On October 1, 1905, the Times practically fell over itself, gushing with enthusiasm:

The skeleton of a bookcase that will hold 3,500,000 volumes — without exception the largest bookcase in the world — that is what one may see to-day back of the great central hall of the majestic marble structure that is slowly rising in Bryant Park.

It is just completed, this marvelous network of steel bars and uprights, and exemplifies the very latest methods and appliances for the shelving of books. There is nothing like it in the great libraries of the Old World . . . In the Congressional Library . . . the modern steel bookcase is in use, but not in the solid, impressive mass, distinguishing it over all others, that is shown in the New York Public Library . . . Above it will be placed the spacious reading room of the library, on either side the various halls, offices, and exhibition rooms. Thus surrounded, this monster bookcase becomes, architecturally, the heart of the whole structure, the treasure for whose protection this marble palace is built. Even now, with this maze of steel laid bare, it is difficult to appreciate its immense capacity for the shelving of books. A bookcase holding three and a half million volumes means a series of shelves that if laid together, end to end, would measure over eighty miles.

In short, today there are 88 miles of shelf space in the Stephen A. Schwarzman Building, with an additional 40 miles of bookshelves under Bryant Park. However, the birth of the city’s public library and its epic set of shelves marked an important national moment. The city’s new library was compared with “The Greats” — Bibliothèque Nationale in Paris, the British Library in London (then part of the British Museum), and the Imperial Library in St. Petersburg. All of these other libraries, however, would pale in comparison to what the New York City Library would offer. The New York City Library was slated to hold more books and, subsequently, would have more impressive bookshelves to hold such a collection. The bookshelves were a dose of nationalism, measured in linear shelf space. If the books were the soul of the New York City Public Library—to draw from our Cicero—then the bookshelves were the building’s backbone.

But where did those eighty miles of bookshelves at the New York Public Library come from? What did they look like? How were they built? And how do they live today? What made them practically megafauna in a literary landscape? The bookshelves of the New York Public Library can actually trace their evolutionary roots to the mid-nineteenth century, to a small industrial steel company out of Louisville, Kentucky. As public libraries expanded in their size and scope at the turn of the twentieth century, the need for bookshelves that could measure their linear storage space by the mile and were built to last quickly became apparent. Bookshelves of this magnitude were a careful balancing act between art, science, and engineering. These particular shelves used by public and institutional libraries were metal monstrosities, built by the steel and iron aggregate business Snead & Company. By the late nineteenth century, Snead & Company was turning out cast-iron sidewalls, store fronts, window frames, girders (noted as “ a novel article ” ), tea kettles, and spittoons. They were set to expand into the rapidly growing market of designing and manufacturing shelves for big libraries with big bookshelf demands.

Snead & Company was confident it could manufacture just about anything, especially on a large scale. Snead & Company also modified several of their shelf designs to fit in small- to medium-sized libraries. As libraries like the Library of Congress, the Widener Library at Harvard, or the College of Physicians Library in Philadelphia dramatically expanded the scope of what they would collect and catalog, this meant that these libraries doubled down on the amount of materials they needed to shelve in the upcoming century. The Snead library shelves were huge cast-iron behemoths, weighing hundreds of pounds with amazing technological detail; earlier Snead bookshelves sported open-bar construction, thus taking weight out of each shelf. The bookshelves had a “z” notch that would allow each shelf to be moved up and down to best deal with the height of the books being stored on the shelf. Columbia University’s library needed a different kind of bookshelf designed and produced for its growing stack? No problem. Librarians were concerned with the ill health associated with constantly walking up and down stairs? Not to worry. The famous librarian William Frederick Poole argued that one of his book attendants had become lame and exhibited “the same symptoms as the treadmill prisoners in England” after just one year of working with non-Snead shelves at the Newberry Library in Chicago. 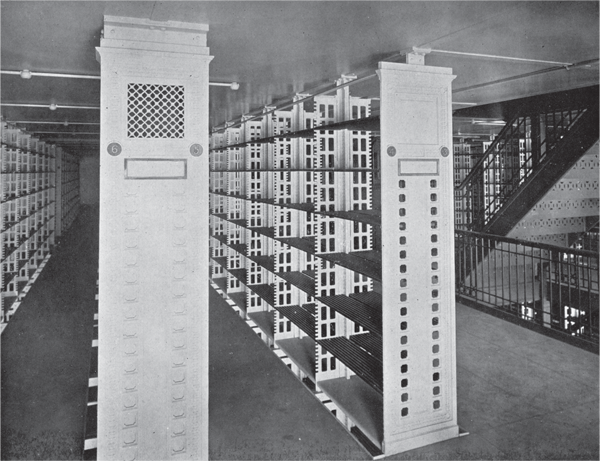 This demand for big bookshelves tapped into expertise in engineering as well as architecture, and appealed to librarians as well as archivists. Engineers designed these big bookshelves to withstand environmental fluctuations and to be able to house collections of materials in ways that facilitated good conditions for the collections — for example, making sure that bookshelves in institutions were devoid of wood that could tempt the growth of mold and nesting insects, the bane of libraries ’ existences. As more libraries became institutions that housed collections, they required bigger bookshelves; as more libraries lent books to more patrons, those libraries required more bookshelves. Standardizing shelves meant that more books could be stored and more library patrons could come through the stacks.

By 1915, these bookshelf standards meant that the basic unit of a shelf on a bookshelf was three feet, thus insuring that replacement parts could be ordered and pieces standardized for all included in the big boom of library building. Designed by architect Bernard R. Green, the shelves were the underlying supporting architecture to libraries, and the careful art nouveau engraving along the end of their shelves—the roses and cross-hatch patterns, described as “ novel and ingenious treatment of detail”—were a visual shorthand for the institutional gravitas and cultural import of the libraries which housed those bookshelves. By the 1920s, public libraries were staples of mainstream Americana, thanks in large part to Andrew Carnegie ’ s ambitious public literacy initiatives and library building projects, and Snead shelves were integral parts of those public libraries.

The Snead shelves at the New York Public Library were an unexpected public flashpoint in 2014. Library president Tony Marx proposed getting rid of the bookshelves to create more public space in the library. Some of the book collections would be moved off-site to storage in New Jersey and other collections of books would be redistributed throughout the city’s other library branches. The outrage at the proposal was immediate, as were protests against the move. To be fair, the move was orchestrated partly out of a desire to maintain necessary conditions—cooling, air pressure, etc.—for keeping books in compliance with fire safety regulations. But the proposal showed an incredible nonunderstanding of the relationship between the shelves and the building.

Aside from any issues of the historical value of the shelves, the proposal was equally ludicrous from an architectural standpoint. “Steel columns supported the bookstacks and the cast-iron shelf supports were attached to these columns as in the latter. However, in the New York library, the columns also supported the floor of the main reading room on the third floor of the building, ” notes Snead historian Charles Baumann in 1972. “The main floors were made multiples of the stack tiers in height, and the tier height was increased from seven feet at the Library of Congress to seven feet six inches ‘ in order that the first, third and fifth stack decks might line up with the main floors of the building.’” As one critic wryly noted, “ Engineers described the idea of removing the shelves that support the Rose Reading Room as ‘cutting the legs off the table while dinner is being served.’” Those Snead & Company bookshelves were, literally, tons of structural support that ensconced the entire building.

If a room without books is a body without a soul, the removal of books from the hundred-year-old shelves seemed to be suffocating the life and soul of the Fifth Avenue library. To switch metaphors, taking these massive megafauna out of the literary ecosystem creates its own set of issues. The proposal was abandoned and the Snead shelves are still in the Stephen A. Schwarzman Building. Where other libraries have closed, Snead shelving simply begins a new stage of life—as an antiquarian curiosity, a diaspora novelty, or an object in refugia. Dedicated antique collectors can find Snead shelves on eBay for a small fortune.

The big bookshelves of the turn of the twentieth century were born out of demand. On one hand, they demonstrate the success of the public library, but on the other hand, they cast a huge shadow of expectation for the twenty-fi rst century. (“What kind of library wouldn’t have imposing bookshelves?!?”) These bookshelves were skeletal elements of institutions, adding reinforcements to the library’s posture, filling every strut and beam with vertical space to store and shelve books. Quite simply, these massive bookshelves occupy a robust niche in the literary landscape.

The death and resurrection of bookshelves

In the climactic scene of The Name of the Rose, the Benedictine monastery’s secret library burns to the ground, incinerating thousands of books and their bookshelves, destroying what the character Adso of Melk called the “greatest library in Christendom.” Adso returns to the abbey site decades later and finds that vines grow tall and lizards dart among the buildings ’ blackened stones; he makes his way to the remains of the library and encounters a bookshelf.

Along one stretch of wall I found a bookcase, still miraculously erect, having come through the fire I cannot say how; it was rotted by water and consumed by termites. In it there were still a few pages. Other remnants I found by rummaging in the ruins below. Mine was a poor harvest, but I spent a whole day reaping it, as if from those disiecta membra of the library a message might reach me. . . At the end of my patient reconstruction, I had before me a kind of lesser library, a symbol of the greater, vanished one: a library made up of fragments, quotations, unfi nished sentences, amputated stumps of books.

The abbey bookshelf is long since dead, but the library that it signified starts over: the life cycle of books and books on shelves. However meager Adso ’ s library is, culled from the tattered remains of the fire, the cycle of curating material to put on the bookshelf repeats itself neatly.

Whatever people see when looking at any bookshelf—Snead, IKEA, or anything in between—they are looking at an object with physical, historical, and psychological components. Every bookshelf has a story to tell and everything about the bookshelf—how it looks, how it is, what books and not-books are put on it—is the result of decisions made over and over throughout the life history of any particular bookshelf.